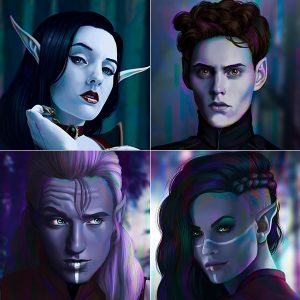 The Empire of the Elder Elves fell when a brutal civil war tore it in half, and then the slaves revolted, and then all their great forests burned to ash and cinder. The survivors, now called Light Elves and Dark Elves, hold a thousand year grudge – a paranoia that their ancient war will only end in annihilation: and now that war has come. The Light Elves have every advantage, but the Dark Elves have no intention of dying. Yalia’s objective is simple, escalate this regional conflict between elves into a global war. Do what Yalia does best, make enemies and profit in the chaos.

10 beautiful regions to explore, each with their own stories and opportunities. Forge alliances with powerful factions, or attack them all, the choice is yours. Dynamic storytelling with many possible endings based on your actions.

30 unique classes, each with powerful strengths, lets you build thousands of team combinations to destroy your enemies with any preferred playstyle.

Dark Elves are born in darkness, stealth and surprise are core to your survival. Plan and launch devastating first strike attacks against enemy patrols from stealth. Sneak past enemies you cannot fight yet, and beware of stealth enemies.

Whispers on the Wind

Send your agents on solo missions to gather intelligence (Whispers), making future missions easier. Replaces complicated base building minigames common to the genre, with these action and dialogue decisions.

Receive news and updates about Shadows Lie and other future releases!